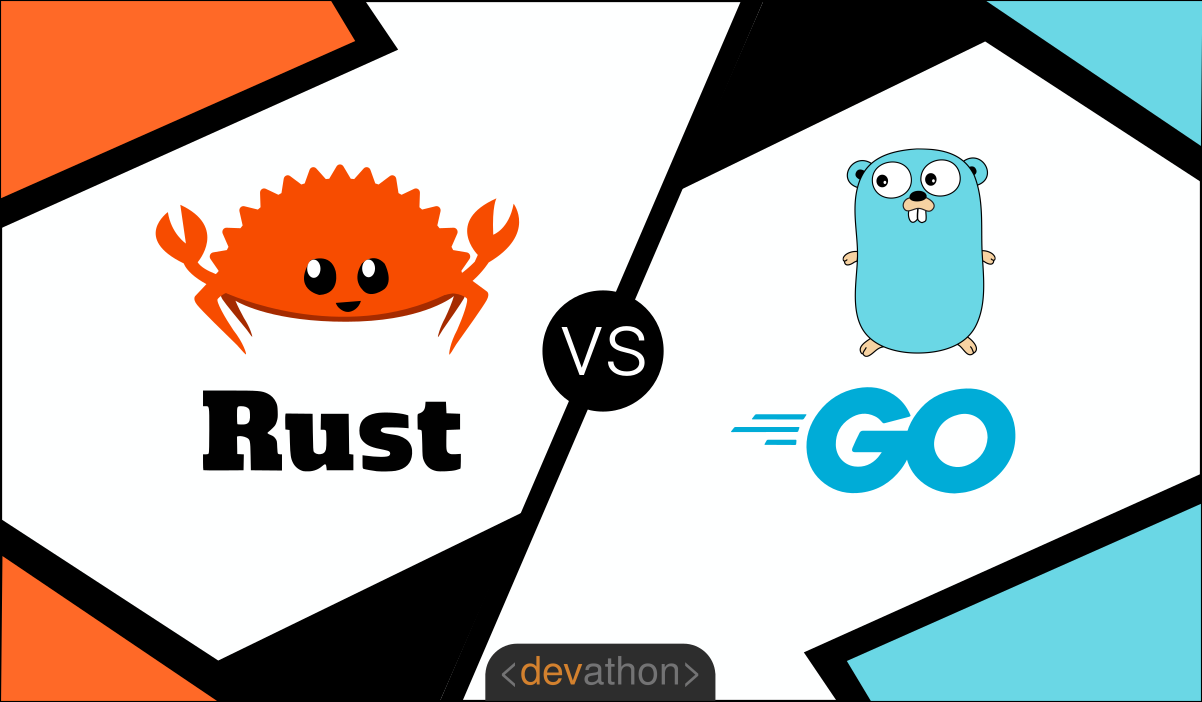 Are you an entrepreneur or a senior enterprise IT leader who is planning to undertake a web development project? You might be wondering which programming language to use. In relation to this, you might have come across programming languages like Rust and Go. You are probably weighing between Rust vs Go and trying to decide which one to use in your project.

Both Rust and Go are increasingly popular languages. Which one fits your requirements better? What are their pros and cons and which one should you choose? In this guide, we answer all of these questions so that you can make an informed decision. Read on!

Graydon Hoare designed Rust while working with Mozilla Research. There were other contributors too, e.g., Dave Harman, and Brendan Eich. Rust is a statically-typed, compiled programming language. It’s an open-source language, and its syntax is similar to that of C++.

The first release of Rust came in 2010. Since then, developers have enhanced this language significantly. At the time of this comparison, the latest stable release of Rust is 1.42.0, which came in March 2020. Several well-known organizations use Rust, e.g.: 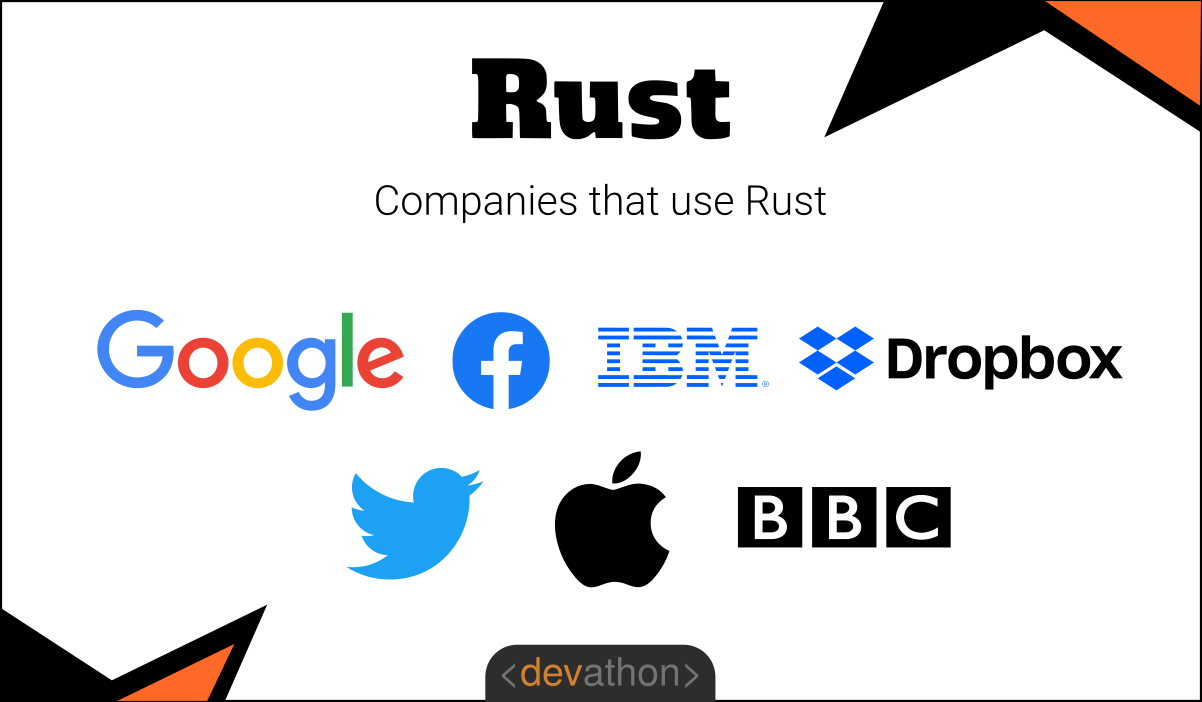 Rust: Where can you use it?

A relatively new language, Rust can have varied usage. You can use Rust for systems programming.

Rust offers memory safety, moreover, this statically-typed language reduces common programming errors. As a result, if you are building a large system where security is very important, then you can use Rust. By its very design, the language reduces application security vulnerabilities.

Rob Pike, Robert Greisemer, and Ken Thompson developed Go jointly. They developed it in 2007 at Google, however, they launched it for the first time in 2009. Go, or “Golang” as it’s often called, is an open-source programming language. The developers of Go modeled it after C. Go is a statically-typed, compiled language.

Go has gone through several rounds and developments. At the time of writing this article, its last stable release is 1.14.1. This release came in March 2020. The following are a few examples of well-known organizations that use Go: 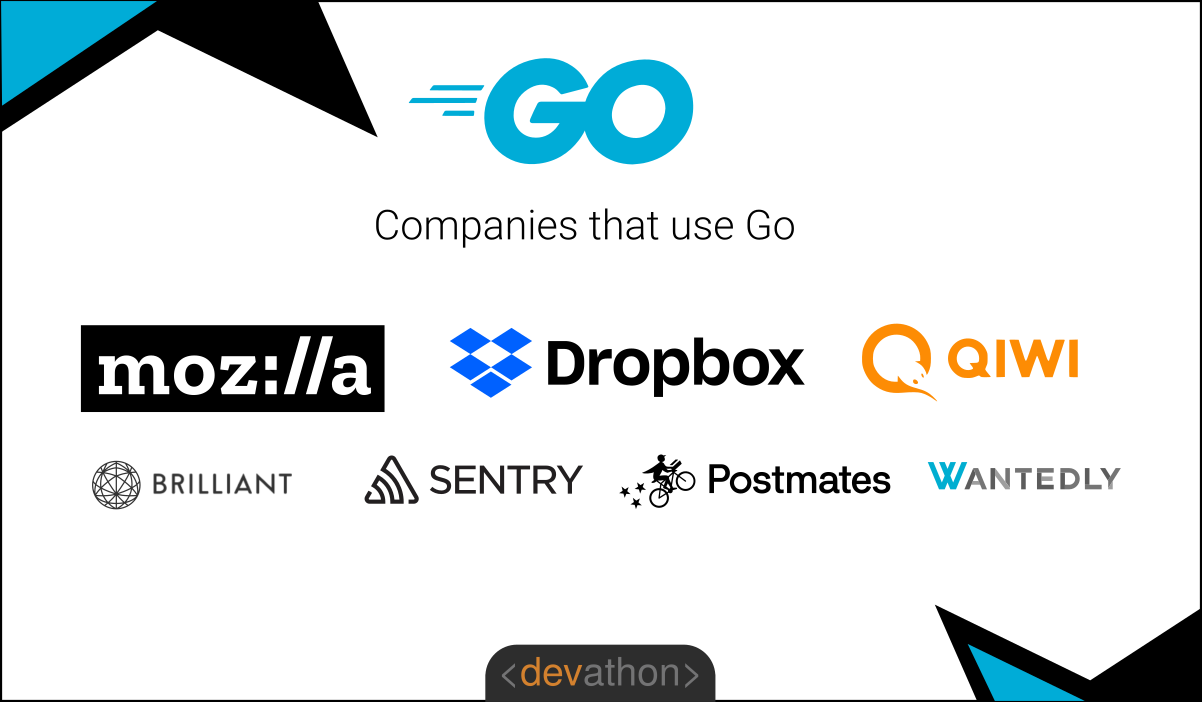 A few popular applications developed in Go are Netflix, Dropbox, Docker, and Kubernetes.

Where can you use Go?

Go is a versatile language and you can use it for several purposes. To be more specific though, you can use Go whenever you need to build a highly modular application system with high security and high speed.

You can use it for system programming and network programming. The language also has prominent usage in web app development, alternatively, you can use Go in applications involving big data or machine learning. 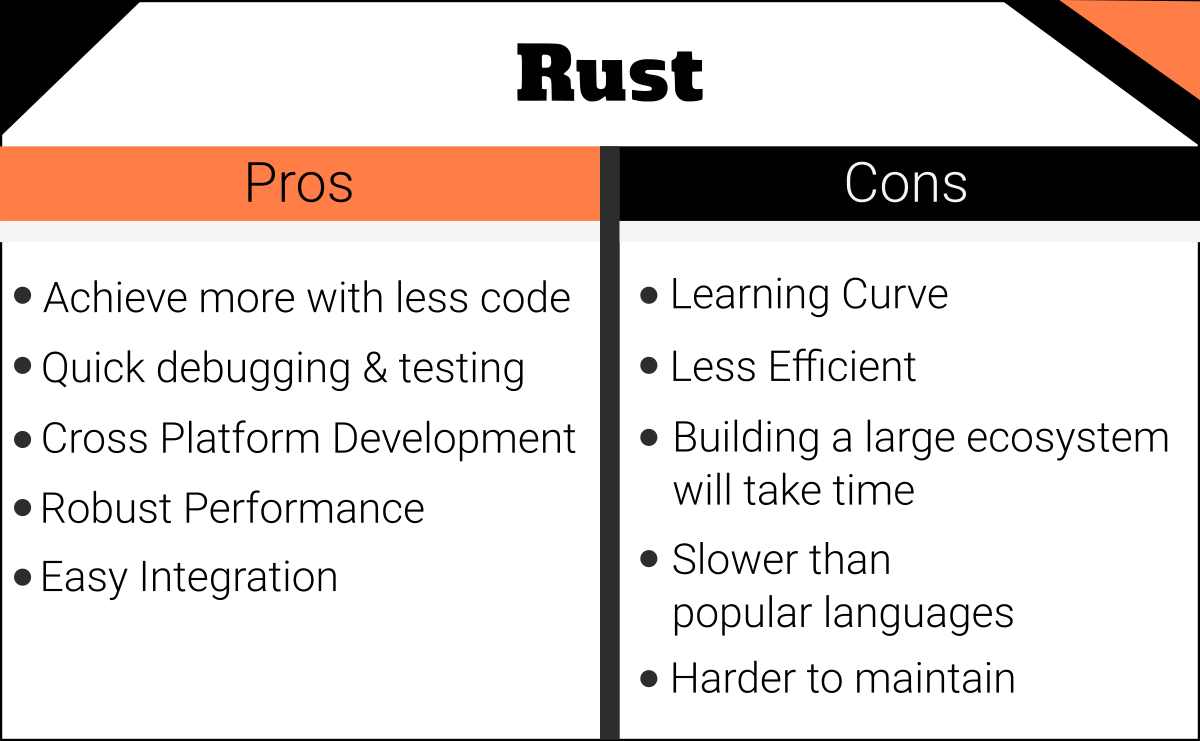 What are the pros and cons of Rust? It offers the following advantages:

There are a few disadvantages to Rust as well, which are as follows:

Go: Its pros and cons 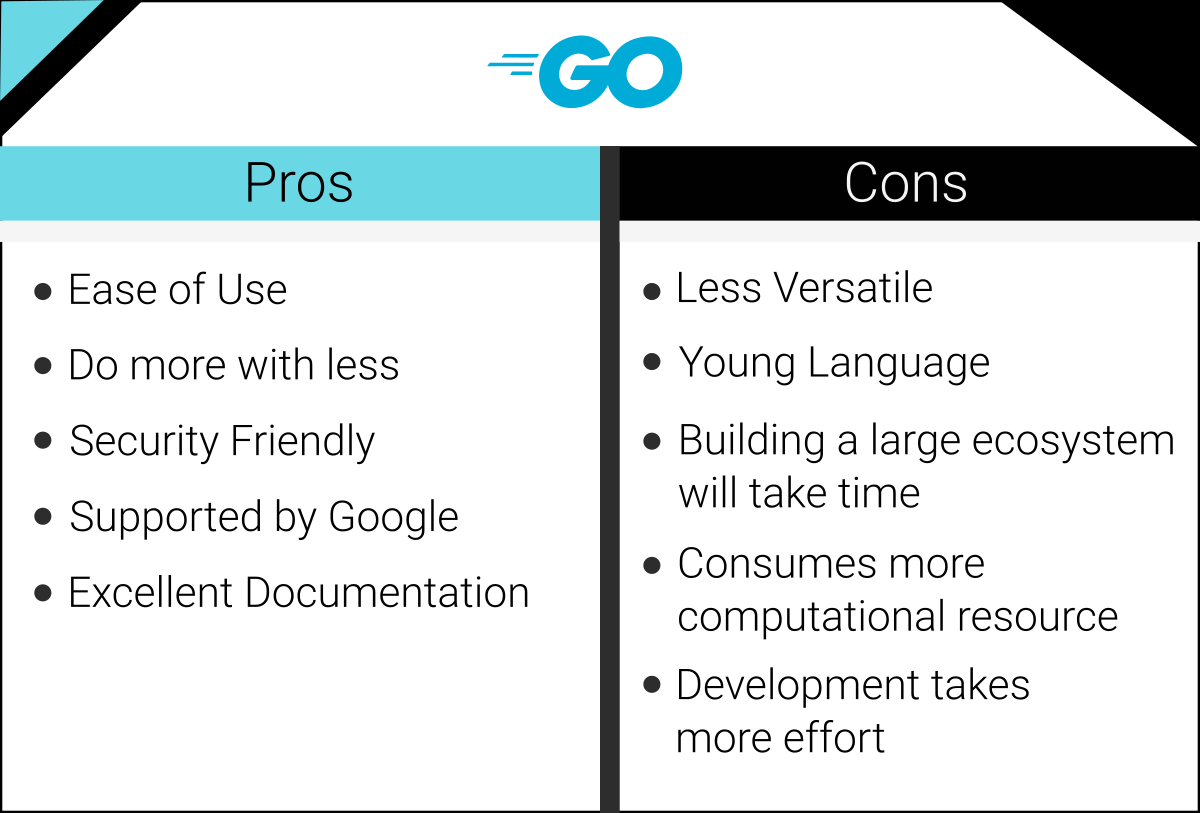 Go is a popular programming language since it offers several advantages. These advantages are as follows:

As with any programming language, Go has a few disadvantages too. These are as follows:

Rust and Go: Their similarities 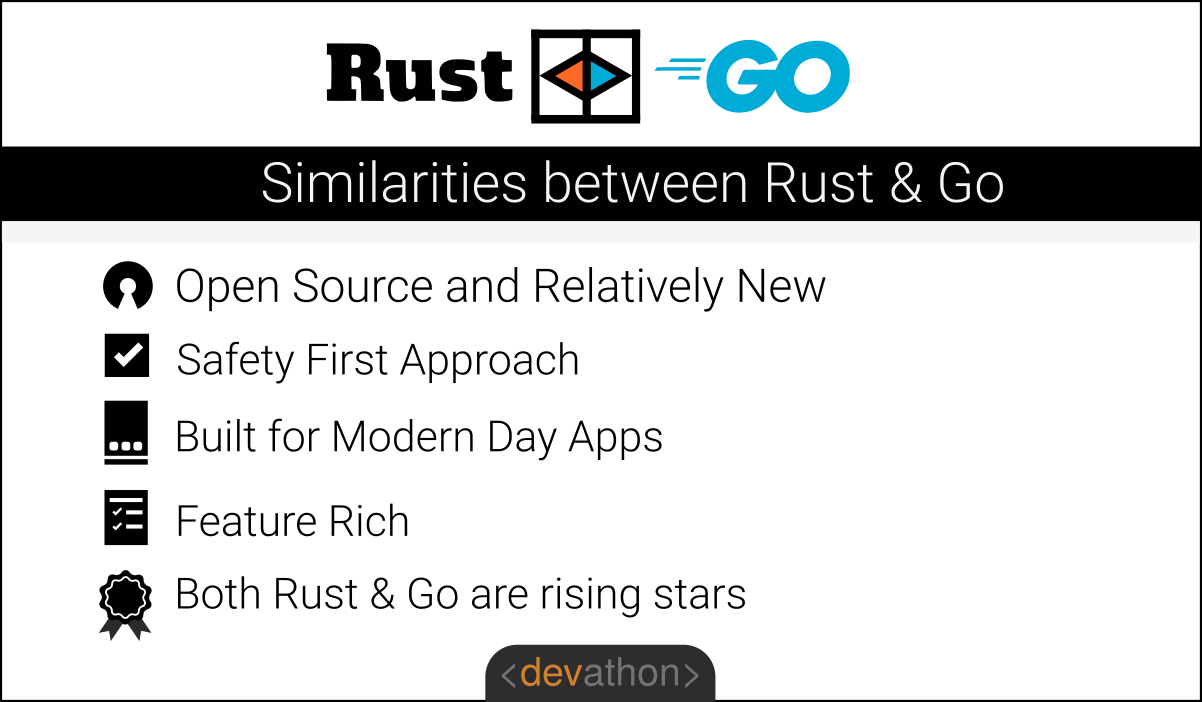 Before we compare Rust vs Go, we need to quickly summarize their similarities as well. These two languages have the following in common:

Go vs Rust: Their differences 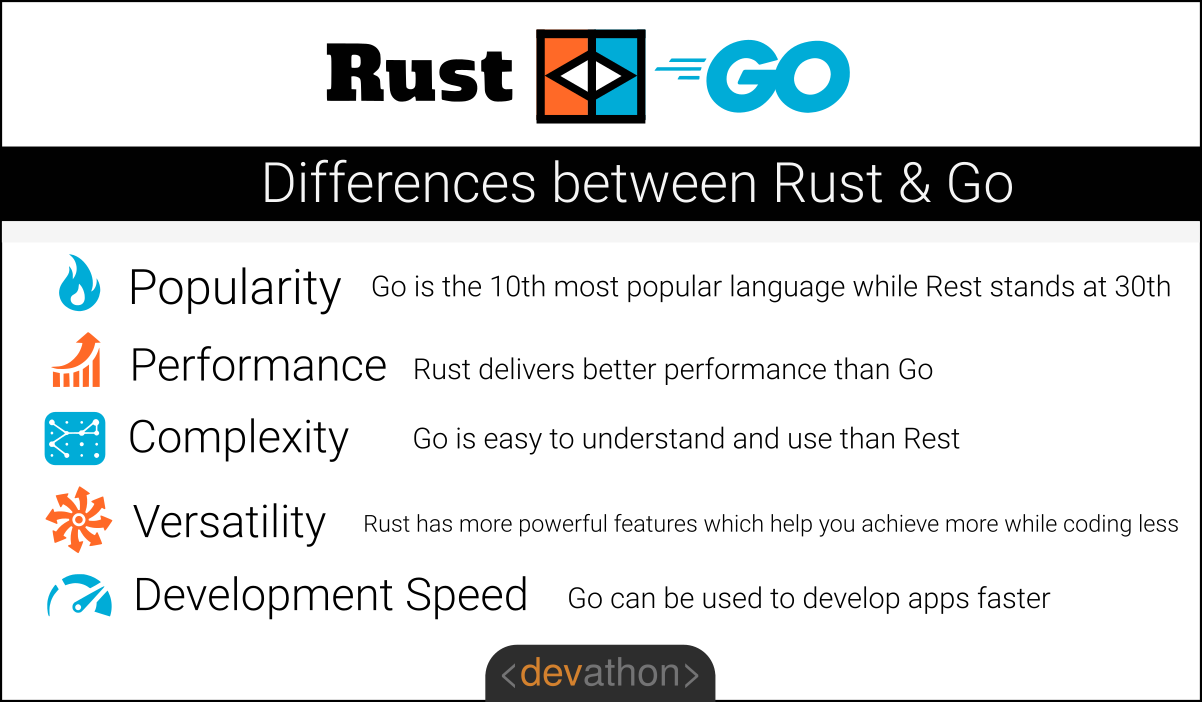 What are the differences between Go vs Rust? These are as follows:

Rust vs Go: Which one should you choose? 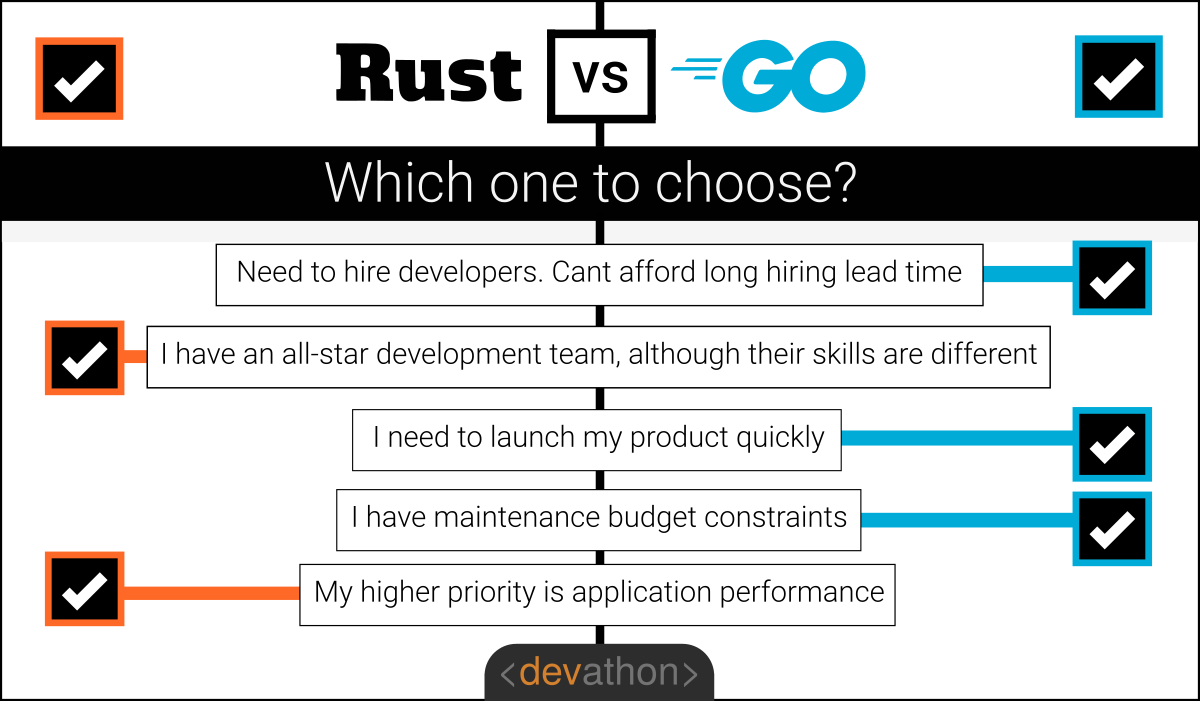 Now that you have a clear idea of Go vs Rust comparison, which one would you choose for your project? The answer lies in your business/organizational context. We will address these questions with the help of a few scenarios that you might be facing. These scenarios are the following:

Rust and Go are both increasingly popular programming languages. We have just compared Go vs Rust and demonstrated the strengths and limitations of both. We have also considered the various scenarios you could face and recommended the best course of action. Analyze your business requirements and organizational constraints carefully since they play a key part in choosing between Rust or Go.

Basic Security Practices and Features A Startup Software Product Should Have