Having looked at the broad areas where the technology is applied, let us delve into some of the interesting real-world applications, as a demonstration of how the technology is fast becoming part of our society’s fabric.

The case of Uber

Uber presents one of the most recent exciting applications through its facial recognition technology-powered ID Check. By using Microsoft’s Cognitive Services, the company has come up with what is known as Real-Time ID check which prompts drivers to capture and submit a selfie, which is used to verify the driver’s identity by comparing the image with existing ones in the database. This affords the platform a highly effective way of safeguarding against fraud and protection of driver’s accounts. 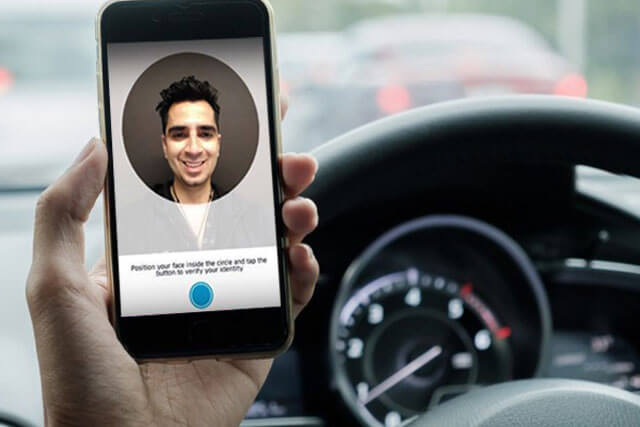 The mechanism is quite simple. Registered drivers are periodically required to capture a selfie within the app before they embark on any rides. The photo is then compared to the one on the driver’s profile through Microsoft’s cloud services. In the case of a mismatch, the account is blocked temporarily. 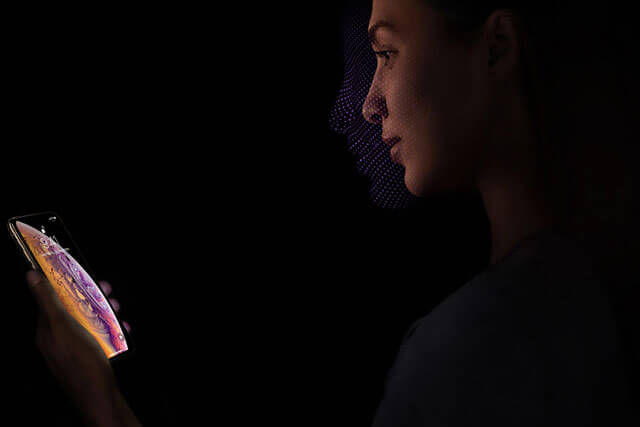 Facial recognition technology is at the heart of “Smartgates”, which is an automated system deployed by nine Australian International airports to accelerate the passport verification process. Any visitor with an eligible ePassport can forego the tedious manual verification process, and simply walk through two Smartgates for quick photos, present the ePassport, and let the system quickly carry out the rest of the process. 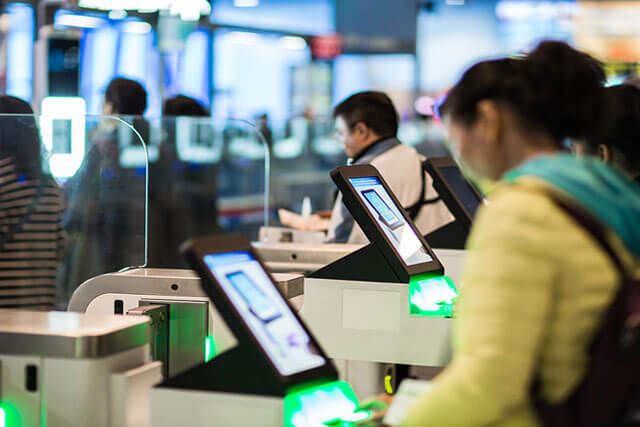 After entering the first gate, you walk through a short distance where a number of camera’s take photos from different positions. The next gate is equipped with an ePassport reader, and once you are close, it asks you to place the passport on the display face-down. After this, additional instructions, such as taking off your glasses or standing still for another photo, may be issued to further inform the verification process. 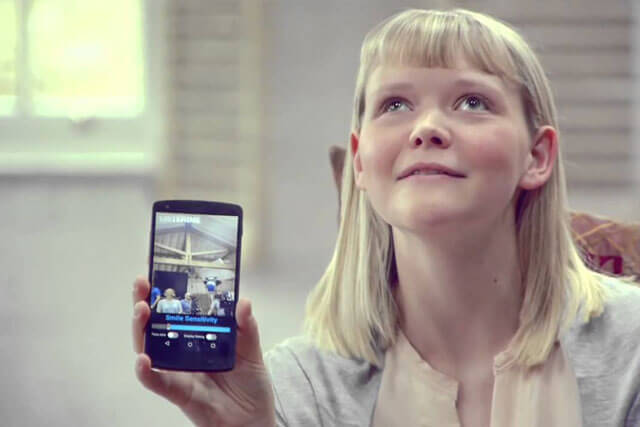 One of the most recent interesting applications goes back to 2015 when a renowned mouthwash brand known as Listerine developed an app aimed at assisting blind people to better understand the emotional atmosphere surrounding them. The mobile app is able to detect smiles within a radius of 5 meters by using facial recognition technology. Upon detection, the mobile phone beeps or vibrates to alert the user, thus fostering positive interaction.

The technology has been proven to have a remarkable success rate in the diagnosis of a number of genetic diseases which typically manifest with characteristic facial features. Classic examples include the Digeorge’s and Down’s syndrome. Although there are key facial features associated with the Digeorges syndrome, experienced clinicians often find it hard to accurately identify the condition as the features tend to manifest differently in different races and ethnic groups. 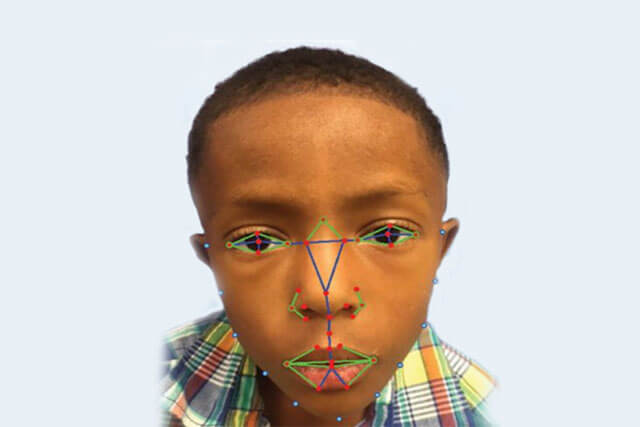 2017 sealed the technology as a step towards a timely and accurate diagnosis of the disease, as a study done by the Sheikh Zayed Institute for Pediatric Surgical Innovation at Children’s National Health System proved that the inclusion of facial analysis technology improved diagnosis success rates to 96.6%. A year earlier, the technology was also proved equally useful in the diagnosis of a more common genetic disorder which also harbours characteristic facial features, known as Down’s syndrome.

Google Photos features an in-built facial recognition software that groups your photos using people’s faces. While it is currently not possible to assign names to the images within the photos, the algorithm can easily identify faces and classify photos to assist you with organizing and finding specific photos quickly. 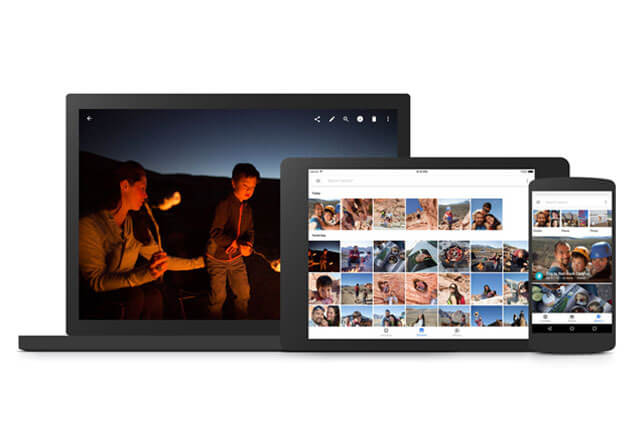 As demonstrated in the above picture, the ‘albums’ icon within the mobile app opens up several categories including ‘people’, ‘places’ and ‘things’. The ‘peoples’ category classifies photos based on available faces, while the ‘places and ‘things’ categories classify the photos based on location data if the camera is GPS enabled. However, it’s important to note that due to privacy related issues, some countries such as the U.S are not allowed access to the facial recognition capabilities of the app. 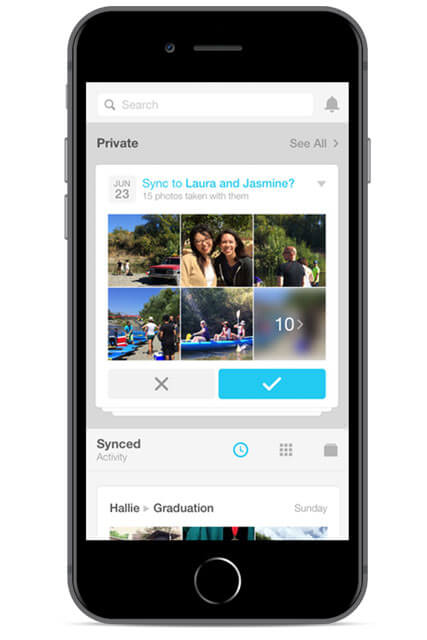 Facebook’s “Moments” app was designed to assist users with organizing and sharing their photos in a more efficient way. The app identifies which friends are in the photos, and groups them based on the identification and the time of the photoshoot. Once the classification is done, the photos can be synced with friends, who may also sync their photos as well. The synced photos are organised by the app, and specific photos can be easily found using a search feature which matches the name and faces within the photos. 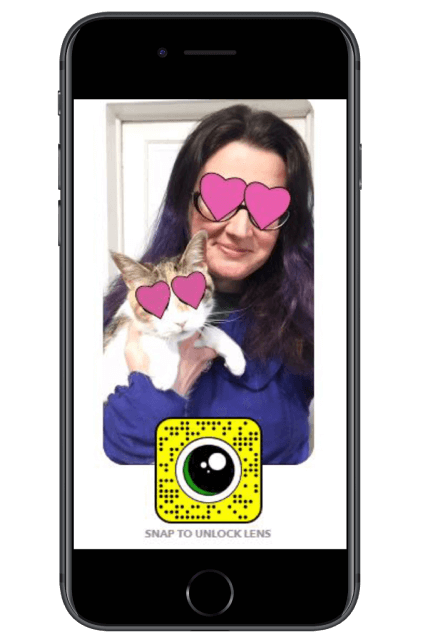 Snapchat’s “lenses”, otherwise known as “filters” or “selfie filters”,  is another great example of applications of facial recognition software outside conventional applications. Formerly known as Looksery, Lenses was acquired by Snap inc in 2015. Through highly advanced facial recognition technology, the application captures and identifies faces within video or photos to allow users to modify their appearance on photos or during live streaming, such as video chats.

Like most facial recognition applications, the technology uses computer vision to detect a human face by comparing the image from the camera with a template within the system, which was built based on the key human facial landmarks from thousands of human faces. Following facial detection and identification, the system can alter and apply a variety of animations to the images according to the user’s preference.

When you pay a visit to one of China’s 300 KFC restaurants, you’ll easily notice that the cashier’s counter queue hardly holds more than a few people. This is due to the presence of self-ordering terminals which allow people to order their food and pay with nothing more than having a photo of their face taken by the ordering system. 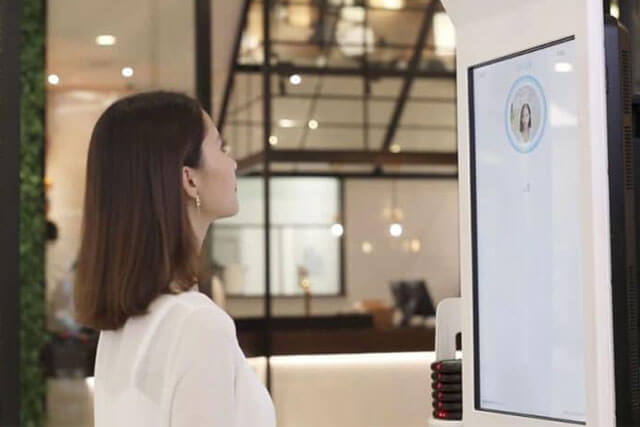 The technology was established by Ant Financial two years ago in the Chinese city of Hangzhou, which was effectively its first application in a physical store. It basically eliminates the need for any bank cards, cash or phone to carry out the transaction. Once the order is placed at the terminal, it scans the customer’s face which is then compared to the image stored in the database. A match triggers the payment transaction which is notably quicker than traditional methods.

Facial recognition biometric systems can be set up differently and this has implications on the suitability of a particular biometric system. A few moments of consideration of each type along with the associated advantages and disadvantages would serve us well.

In this architecture, all the key steps, including storage of templates, are done on a single device. A good example is iPhone X’s facial recognition system where the captured image is compared with a template stored on the device. Here are the key up and downsides of this kind of setup.

The clear benefits and immense potential associated with facial recognition systems has brought about a growing market of facial recognition products, with some of the biggest names making a decisive jump onto the bandwagon. By 2017, the market was valued at $3.87 billion, which was estimated to skyrocket to around $9.87 billion by the year 2023.

Google, Amazon, Microsoft, IBM, and Kairo provide some of the leading API’s on the market. However, the key to getting the best API for specific needs is knowing the advantages and limitations of different API’S and facial recognition systems. For instance, while facial recognition software for OpenCV can be exceptional with video face recognition, it doesn’t necessarily offer the same abilities on images. Let’s have a look at each of the API’s listed above in a little more detail.

Rekognition is part of the Amazon Web Services (AWS) ecosystem which provides users with a robust range of tools in order to create and implement web applications. The facial recognition API allows access to Amazon’s Rekognition service, which provides a simple solution for adding video and image analysis to various applications or websites. The API was developed by the company’s computer vision scientists based on the revolutionary deep learning technology, which allows users to analyse both videos and images without prior expertise on artificial intelligence and machine learning. 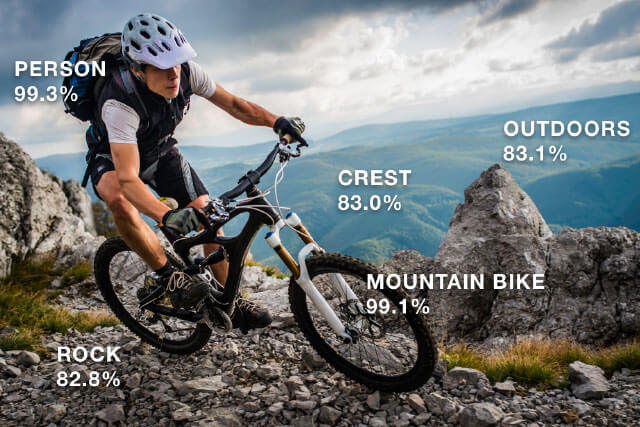 Images or video files can be stored on Amazon’s storage infrastructure known as Amazon S3 where they are accessed before being processed by the facial recognition software.  To date, it offers one of the richest APIs in terms of capabilities. Let us delve a bit more into the key features.

Much as the API provides a commendable array of capabilities, there are a few limitations worthy of consideration.

The Google cloud vision is part of Google’s cloud platform, which allows building, deployment, and scaling of apps, websites and other services using Google’s infrastructure. Cloud Vision provides pretrained models through the API as well as the capacity to develop customized models through the AutoML Vision application. 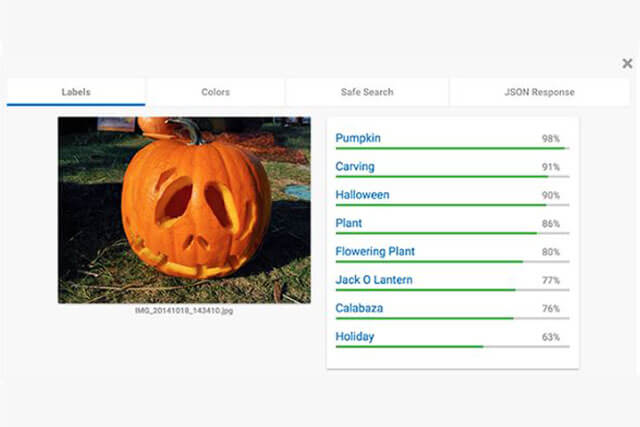 The Cloud Vision API allows users to analyse and understand the content within an image by integrating machine learning models in a user-friendly API. It has the ability to classify images into different categories, detect faces and objects, as well as identifying texts embedded in the image. Additionally, users can develop metadata on the image catalog, alter offensive and inappropriate content, and conduct emotional analysis.  Here is a round-up of the key features and some of the limitations. 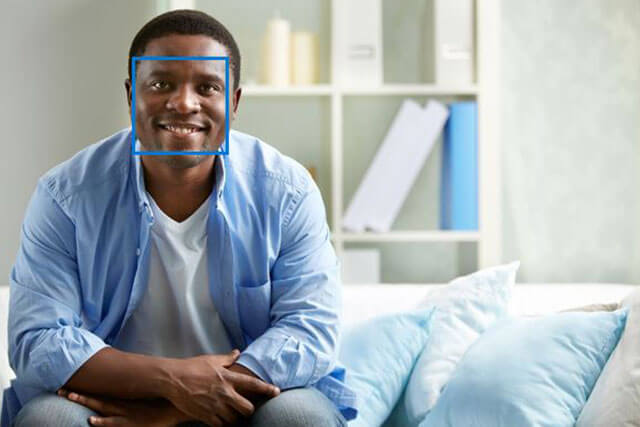 The Microsoft face API was initially released in the year 2016 as part of Microsoft’s Cognitive Services AI cloud services. Though harbouring a few limitations, It features one of the most advanced facial recognition algorithms on the market. The key features revolve around facial detection, recognition and emotional recognition. This allows applications to detect, identify similar or identical faces, as well as identifying the associated emotion. Here is the roundup of the capabilities. 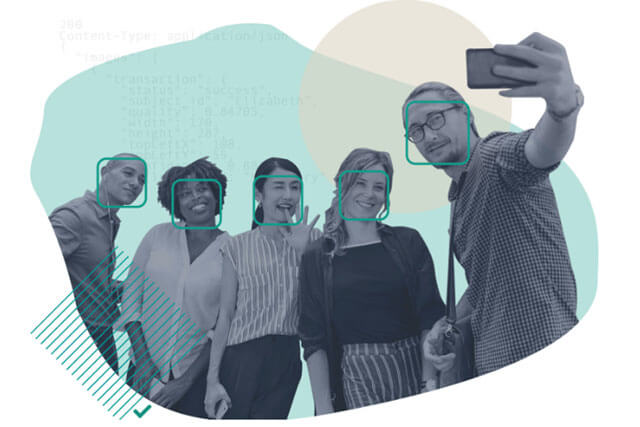 Karios is a human analytics platform allowing users to integrate facial recognition capabilities in applications through its cloud API service. The service can also be hosted on user’s servers to allow complete control of data and overall security. Through the API, Karios boasts one of the most comprehensive packages on the market by offering a wider range of facial recognition features. 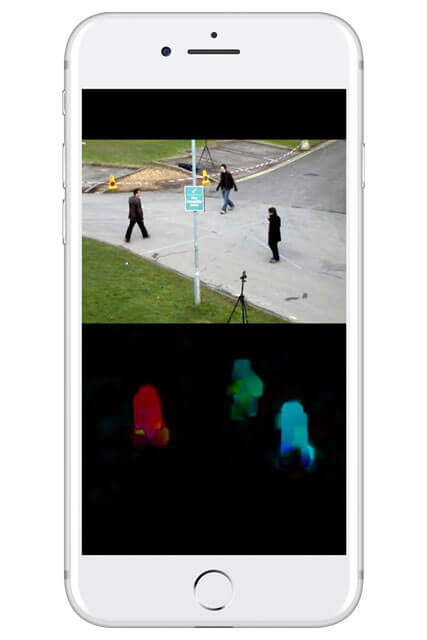 OpenCV is a renowned computer vision library and platform established in 1999. The platform focuses on processing real-time images and incorporates the use of the most recent computer vision algorithms. After Willow Garage assumed support in 2008, the platform now incorporates programming interface to a number of languages including Python, C, C++, and Android. Additionally, the platform exists under a BSD licensure thus it is usable for both commercial and academic purposes.

The latest OpenCV 2.4 comes with the FaceRecognizer: a facial recognition software utilizing some advanced algorithms, which include the Eigenfaces, Fisherfaces and local binary.

The library incorporates a number of optimized algorithms for basic and sophisticated applications.

Below is a table to summarise how the API’s discussed above compare.

Facial recognition systems are fast becoming part of everyday life due to the simple solutions they furnish to the most essential systems and services. Payment systems are fast adopting the technology to enhance authentication processes, security organizations have already adopted it to gain leverage in the fight against crime, the retail industry has discovered its usefulness in marketing, as the entertainment industry has seen its endless value in creativity.